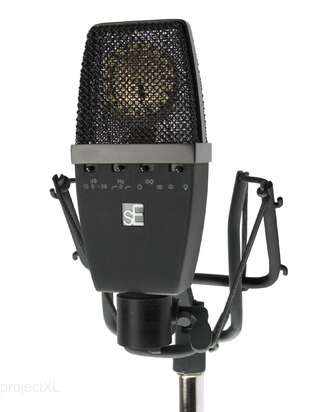 ┬ōHaving used the sE4400a's for the piano parts on Coldplay┬Æs latest album I wish I┬Æd had them on piano duty for the previous record too."

- Rik Simpson, Producer (Coldplay, Jay-Z, Portishead)
"I don't think I've ever started a mic review by introducing the accessories first. But given the innovative design of the shockmount included with the sE4400a, I can't help but get that out of the way so I can then move on to telling you what a great buy the mic itself is."

"It's virtually impossible to go wrong with it, and because of its fairly-neutral sonic character (with just a bit of high-frequency lift), you'll need to lay blame elsewhere if your recording goes awry. Even if you're a professional with countless mics at your disposal, the sE4400a is still a great mic to have for location work or for hurried sessions, when you won't have the luxury of setting up a bunch of mics to try out. Just mount up an sE4400a and hit record."

- Andy Hong, Tape Op (full review)
"The 4400's are DARK sounding, warm...not sharp at all, more like those earlier 414's. So i would say they actually 'out-414' the current 414's...kudos to sE for going with actual toggle switches instead of the electronic gismos that the rival 414's now use."

"The shockmount on the sE caught my attention because it's just so darn flexible. Simple idea...the mic attaches in such a way that it can either sit inside our outside the suspension, which is C shaped. The mic can then be adjust fully to any degree of positioning between the in and out position. Picture being able go get up close to a grill cloth, or lay this down over a tom. No more shockmount in the way, BIG WIN."

"The sE 4400a seems to have more then a little of what it takes to enter the category of studio classics, and favorites."

"The main course of this great mic. The polar patterns.This variety of settings allow you to place this mic in almost any situation."

"To top it all off it comes in a heavy duty carry case with shockmount that looks like it could survive a stadium sized amp stack falling on it."

"Anyone who has ever struggled with traditional shockmounts in tight spots, or had to reinvent physics to place and angle a mic precisely as one intended, or had to fiddle with the skipping off elastic suspension bands will develop a fondness for the 4400a and its shockmount instantly."

- Various Gearslutz users (full reviews via Gearslutz.com)
"I couldn't find anything that it couldn't cope with, and its ease of positioning for a large‑diaphragm model was a big plus."

"If you need a large‑diaphragm, multi‑pattern capacitor mic that's almost as easy to position as a small‑diaphragm pencil mic, the SE4400A, with its elegant shockmount, is a very practical choice in the mid‑priced section of the microphone market."

- Paul White, Sound On Sound (full review)
"Wow! After shooting out the sE Electronics sE4400a alongside another popular (hint: similar looking) microphone and its vintage version from the 70s, the sE4400a just killed it! So smooth and warm with character for days and so versatile! The sE4400a is designed to be a go-to mic for just about anything in your studio. This is a must-have!"